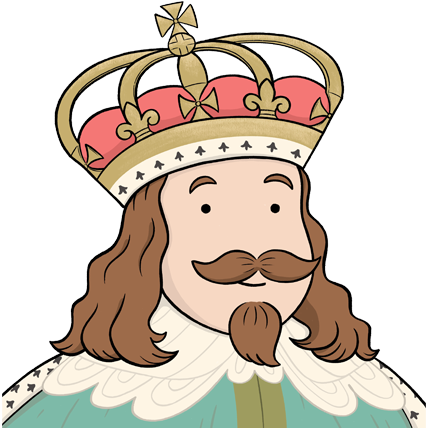 King Charles I was king of England, Scotland and Ireland and believed in the Divine right of Kings. Charles wanted to rule independently and have total control, but Parliament wanted more power and believed they should be involved. The tension between parliament and Charles is one of the causes of the British Civil Wars.

During the Civil War Charles lost London to the Parliamentarians, so he moved his military headquarters to Oxford. Despite having no military experience, Charles often accompanied his men to battles and was involved in planning battles. However, Charles was slow to make decisions and Royalist troops were eventually defeated by the more organised Parliamentarians. In 1649, a group of radical MPs put Charles I on trial for treason.

He was found guilty and executed on 30th January 1649.

Charles had a Scottish accent and spoke with a slight stammer.