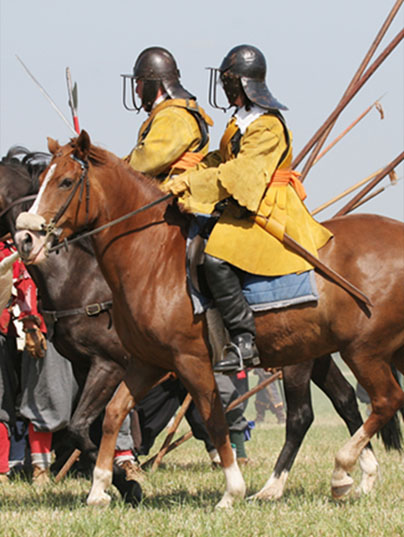 Soldiers who fought on horseback are called cavalry (or Horse). They fought in groups of 60-100 men called troops. Cavalry charged their enemies in rows (or ranks). Cavalry were lightly armoured and heavily armed, carrying a mixture of swords and guns. They would have to be able to shoot and swordfight on horseback, often travelling at great speed. Sometimes they had to perform complicated manoeuvres on horseback, charging in close formation, changing direction whilst keeping that formation in the confusion of battle and charging again.

A typical charge involved the cavalry riding close together, starting slow and speeding up. As they approached their enemies, cavalrymen fired shortened muskets called carbines from a distance. As they clashed with their enemies, they would fire their pistols at close range, then continue to fight with swords. The Horses themselves were used as weapons, trampling enemies underfoot.

Many cavalrymen were from the upper classes. Both Roundheads and Cavaliers spent a lot of money making sure their cavalry had the best horses available. Yet cavalry tended not to wear uniforms. In order to tell their own side and enemies apart, cavalry would wear distinguishing items like a sash or a scarf or even the branch of a tree.

A shortened musket called a carbine. A carbine shot further than a pistol but not as far as a musket. It fired a round lead bullet called a ball. Carbine balls were heavier than pistol balls. A cavalryman would fire the carbine in the early stages of a cavalry charge. The carbine would be worn around the shoulder hanging from a belt.

Cavalrymen wore leather armour called a buff coat. A good buff coat could protect the owner from a sword or knife. Sometimes the coat would be worn underneath metal armour, but mostly cavalrymen only wore the buff coat.

The sword was the main weapon used by the cavalryman. The sword was usually a broadsword, a large slashing weapon. Royalist cavalry greatly preferred the sword to the pistol.

Breast plate and back plate

Many cavalrymen wore two connected pieces of armour to protect the upper body called a breast plate and a back plate. This armour was surprisingly light. Underneath the armour cavalrymen often wore leather buff coats for added protection. Expensive armour could stop a bullet.

To protect the head and face the cavalryman wore a pot helmet. The helmet provided full protection for the head and the back of the neck. The face was guarded by up to three metal bars. These could block a sword slash and still provide the space for the cavalryman to see clearly on the battlefield. A good pot helmet could stop a bullet.