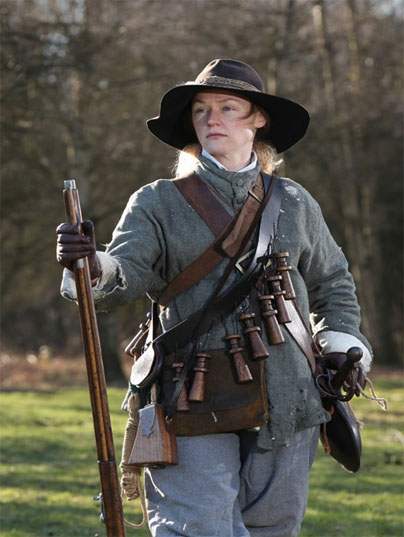 Musketeers were part of the infantry which meant they fought on foot. These soldiers were often drawn from the lowest levels of society. They were not issued with armour. They carried a musket, a cheap sword and ammunition. Muskets were most effective as a volley weapon, when a group fired together.

A writer in the 1600s called these guns ‘the sure and sore messengers of death’ but really, they were clumsy and unreliable weapons. The barrel of the gun was usually 4 feet long (1 metre 22 cm) and of 12 bore. This meant that when 12 musket balls were made from a lb of lead they would fit in the barrel. To fire this gun the musketeer clamped a burning match (a piece of rope soaked in saltpetre which helped it burn slowly) into the curled metal ‘serpent’. When he pulled the trigger the serpent moved, dipping the burning end of the match into the gunpowder pan. There was a flash and fire travelled along a tiny ‘touch hole’ and lit the gunpowder in the barrel of the gun which shot the musket ball. It took about 30 seconds to reload a musket. Muskets had a range of around 100 yards (about 92 metres).  They were not accurate even at this range and so were best fired in a volley (a group all firing at the same time) to make sure they hit the enemy.

These weapons could fail to fire:

Held between the fingers of the left hand. A match was a piece of hemp rope soaked in saltpetre, one of the ingredients of gunpowder, to keep it burning all the time. Matches could be dangerous. There were cases of tired and careless soldiers placing a hand with a lighted match into a barrel of gunpowder and causing an explosion. Glowing matches also showed the positions of musketeers in the dark (although there were occasions when this could be used to the regiment’s advantage, allowing them to place lighted matches in a hedge for instance to fool the enemy). Matches were unreliable and often went out in wet weather.

A leather belt across the chest carrying twelve gun powder flasks and a pouch for musket balls. Each flask or ‘box’ contained a single charge of powder and was made of wood with a wooden or lead cap. The musketeer poured the contents of one flask into the barrel of the musket each time he fired. These ‘boxes’ could become tangled and were noisy. Wood could easily catch fire or swell in wet weather, causing the cap of the flask to jam.

This gunpowder was finer and used in the gunpowder pan.

Wool was fire-proof and offered some protection from the weather. Musketeers were usually recruited from the lowest levels of society. (One Captain complained that he had been sent ‘pedlars (poor travelling salesmen) and prisoners’ to turn into soldiers). They weren’t given expensive armour to protect them.

This infantry sword hung from the belt. It was a cheap weapon mostly useful for chopping fire wood. When too close to the enemy to fire a shot, a musketeer would be more likely to use the club end of this musket to kill his attacker than this sword

This leather bottle hung from the soldier’s shoulder. Soldiers who had no provisions could not fight so food and water were an important part of the soldier’s kit. Soldiers were given Soldiers rations; bread cheese oatmeal, butter, meat, ‘biskets’ and flour for baking

Lead musket balls were issued to musketeers. They were also made on the battlefield and musketeers carried moulds and nippers to help them do this. Lead was sometimes taken from church roofs. On one occasion the pipes of a church organ were melted down and turned into bullets. If the musket ball didn’t roll down the barrel of the gun it would need to be clipped or bitten to make it fit.

This musketeer is a woman, however women were not allowed to fight in the war but there were very rare cases of women dressing up as men and fighting alongside them. Perhaps this is the  ‘Gallant  She- Soldier’ from a ballad of the time which said:

“For other manly practices she gained the love of all,

For leaping and for running or wrestling for a fall,

For cudgels or for cuffing, if that occasion were,

There’s hardly one of ten men that might with her compare.”