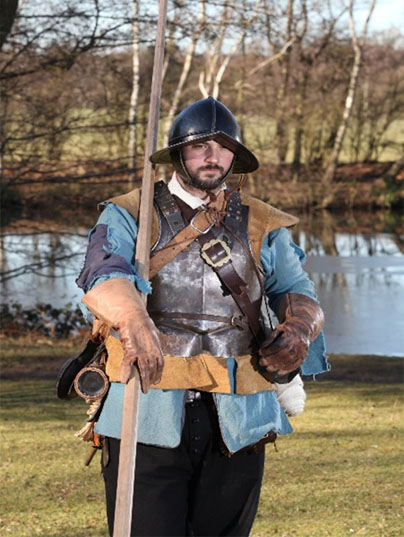 Pikemen were used to defend musketeers against the cavalry. They were also useful to push against the enemy when victory was in sight. They were often placed in the middle of the infantry, with musketeers on either side of them.

These weapons were usually between 16 and 18 feet long.  The length of a regiment’s pikes could be decisive in battle.  The long wooden stave was made of ash and tapered to a point at the end to improve the weapon’s balance.  Long steel plates were fixed on to the thinnest end to protect it from being hacked off. At the very end of the pike was a sharp steel blade that could inflict terrible wounds.

At the beginning of the war Pikemen wore heavy armour that protected them from neck to knee; a breast and back plate, a pot helmet, tassets that covered the thighs and a gorget to protect the throat. This pikeman has removed his tassets which were uncomfortable to march and fight in. Later in the war this heavy armour fell out of use completely.

These helmets were quickly and cheaply made in two pieces and joined together with a comb down the middle. They had a brim all around which was angled up at the front to help protect the soldier from sword blows.

A short sword called a tuck was carried for hand to hand combat. Infantry swords were of lesser quality than those carried by the cavalry and used as a last resort.

Pikemen were trained to use a number of ‘postures’ or ways of handling the pike for different kinds of fighting. For instance, to defend against cavalry attack a pikeman would crouch down, brace the bottom of the pike shaft against his foot and point the head of the pike at the horse’s breast.